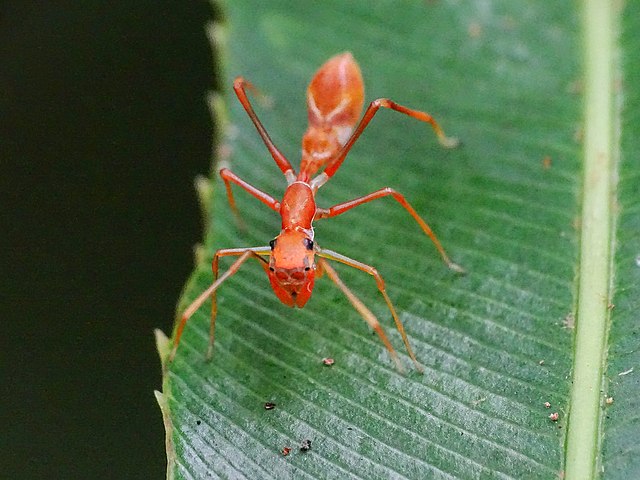 To escape from predators, some jumping spider species mimic the appearance of an ant. A smart move, but it may constrain jumping abilities, Yoshiaki Hashimoto and colleagues supposed.

Everyone can tell the difference between a spider and an ant. A spider’s body has two parts: a cephalothorax and an abdomen, which is usually round. It has eight legs. An ant, on the other hand, is slender. Head and thorax are separated, while the abdomen is connected to the thorax by a narrow pedicel. It has six legs and two antennae.

But you can be mistaken, because some jumping spiders, Myrmarachne species, convincingly mimic the appearance of a spider. This is at the expense of their jumping skills, Yoshiaki Hashimoto and colleagues show.

It will certainly be beneficial for these little spiders to look like an ant. Predators refrain from taking an ant, because this prey may bite or sting, spray formic acid or have an army of colleagues nearby. They also avoid spiders that look like an ant.

The jumping spiders imitate ants in several ways. Females of Myrmarachne plataleoides, for example, resemble the green weaver ant (Oecophylla smaragdina) very closely. They are the same size and colour. The shape is also similar, thanks to a constriction behind the head and an elongated pedicel between a slender thorax and a thin, long abdomen with an anterior constriction. Two black spots on the side of the head imitate the large eyes of ants; the eight real eyes at the front are hardly visible. And to complete the picture, these spiders often slightly lift the first pair of legs; it seems as if they have six legs and a two antennae, just like ants.

But Hashimoto wondered: are jumping spiders that mimic ants really jumping spiders? In other words, isn’t the disguise at the expense of their jumping abilities?

Jumping spiders don’t construct a web, but they hunt on the ground and jump to their prey. To jump, they stretch their legs. This not done with muscle power, but with power generated by liquid pressure: the spiders pump hemolymph, their variant of blood, from the abdomen into the cephalothorax, to which the legs are attached, and by compressing the cephalothorax, they raise the pressure, extending the legs. For ant mimics this is difficult, because they have to force the liquid through the thin stalk between the abdomen and the cephalothorax. And as the cephalothorax is thin, they cannot create high pressure. Hence the question.

The researchers took seven Myrmarachne species from tropical Southeast Asia and compared their shape with that of other jumping spider species. Myrmarachne-spiders were indeed more elongated and slenderer. Some ant mimics, including Myrmarachne plataleoides, were very slender because they mimic a very thin ant.

In a lab test, non-mimetic jumping spiders jumped a distance nearly three times their body length. The ant mimics didn’t perform as well. The very slender types only jumped two-thirds of their body length, the thicker ones went a bit further. So, ant-mimicking jumping spiders have indeed sacrificed their jumping ability in exchange for safety. That makes hunting more difficult, because they cannot jump on prey from a distance. Tests show that their prey capture success rate is lower than that of other jumping spiders.

There is some evidence, the researchers write, that the most slender ant mimics switched to a mainly plant-based diet. That would be a giant leap – albeit figuratively.