Hornets are dangerous predators of the Asian honey bee. The bees try to avert danger by making approaching hornets know they have been seen, as Shihao Dong and colleagues describe. Or by covering the nest entrance with animal faeces, as Heather Mattila and colleagues show.

The Asian honey bee, Apis cerana, is threatened by dangerous hornets, more than the European honey bee. Such large wasp with strong jaws and venomous sting can hover in front of a colony of honeybees, plucking foraging bee workers from the air to consume them.

And worse: hornets can operate in groups, enter a bees’ nest, kill any adult bees that do not flee and take possession of the larvae and pupae, which they bring to their own nest to feed their offspring. Like honeybees, hornets live in social groups with a queen laying eggs and workers taking care of her offspring.

So, a visit from hornets is something that should definitely not occur.

Asian honey bees have developed different defence mechanisms. The bees inform an approaching hornet that they are ready to defend themselves, as Shihao Dong and colleagues report. So, a surprise attack is not possible. Or they smear animal faeces around the entrance of their nest to frighten off the enemy, Heather Mattila and colleagues show.

Hornets are especially dangerous in autumn, when the brood in their nests needs a lot of animal food.

A hornet that detects a colony of Asian honey bees cannot enter it immediately. The nest entrance is too small and it is monitored by bee guards that alert their nest mates if necessary. But the hornet can apply a chemical scent mark to the nest to recruit dozens of colleagues, and collectively they can enlarge the nest opening by chewing and invade. The bees have to prevent that from happening. They have to deter the first hornet, the scout, and avert a group attack.

That is possible by showing an approaching hornet that it has been seen. Asian honey bees in China display a so-called I-see-you signal: when an Asian hornet, Vespa velutina, approaches the nest, bee guards will shake their abdomen. Guards copy this movement from each other, even without seeing the hornet with their own eyes, and the behaviour attracts more guards. The closer the hornet approaches or the faster it flies, the faster the swinging motion becomes, up to more than 30 sweeps per minute. 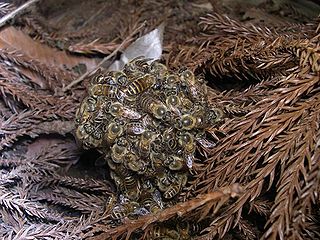 It repels the hornet. Because if the bees spot it in time, they are able to attack and kill it, as was already known. They enclose it in a dense ball of tens or hundreds of bees. The bees vibrate their flight muscles, so that the temperature in the ball rises to about 47°C, a temperature that the bees just endure, and the carbon dioxide content rises. The hornet succumbs.

But it is better if it doesn’t get that far, because killing a hornet in such heat ball takes a lot of time and energy. Not all bees survive the heat balling. Hence, the bees first try to discourage the enemy.

The Asian hornet is a small species, and not the most dangerous one for the Asian honey bee. It does not perform mass-attacks and does not enter a bees’ nest. More threatening are the Asian giant hornet, Vespa mandarinia, and the related Vespa soror.

To discourage the larger hornets, Asian honey bees take more pains than for the smaller species, as it seems. In Vietnam, they manage to keep the large hornet Vespa soror away from their nest by applying mounded spots of animal poo around the entrance. When workers notice a hornet or its chemical scent mark, they look for a pile of animal dung, pick up a clump of it with their mouth parts, carry it to the nest and stick it close to the entrance. Upon detecting the smaller Asian hornet, Vespa velutina, near their nest, they don’t do this.

A sullied entrance acts as a deterrent: hornets leave faster and are less likely to land on the nest and enlarge the entrance opening. The researchers are not yet sure why animal poo has this repellent effect.

In northern Japan, honeybees smear chewed plant material around the entrance of their nest after spotting an Asian giant hornet, Ayumi Fujiwara’s research showed. It could well be that the smell of the stuff masks the chemical odour mark of the hornet. And maybe foetid poop does as well.