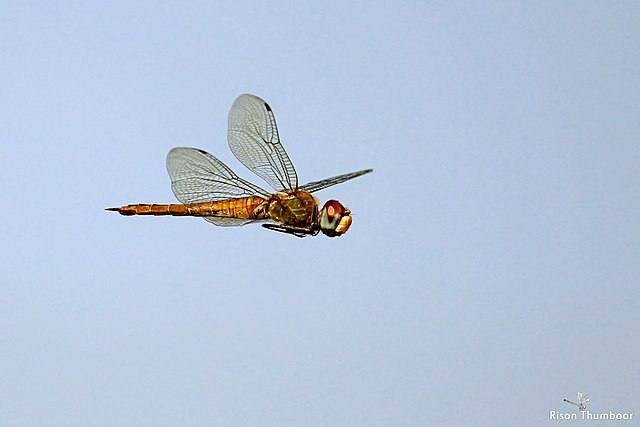 The dragonfly Pantala flavescens, the globe skimmer, was already known to be a migrating species that travels enormous distances. By conducting chemical analyses of the wings, Keith Hobson and colleagues once again confirm this picture.

It is well known that some butterflies migrate between widely separated regions where they spend summer and winter: monarch butterfly and painted lady. It is less known that two species of dragonflies exist that don’t refrain from undertaking a long journey either: the spot-winged glider, Pantala hymenaea, from North, Central and South America, and above all the globe skimmer dragonfly Pantala flavescens, which has an almost worldwide distribution. These species belong to the family Libelludae. 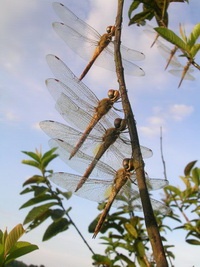 Earlier research by Daniel Troast had shown that no genetic differences exist between globe skimmer populations from North America (US), South America (Guyana) and Asia (India, Korea and Japan). This means that these populations are in contact with each other. In other words: the insects must be able to travel great distances.

And they do, according to chemical analyses of the wings by Keith Dobson and colleagues. These analyses focus on the ratio of hydrogen isotopes, which corresponds to that of the water in which the dragonflies lived during their larval stage. The hydrogen isotopic composition of water bodies depends on precipitation and temperature.

Earlier, Hobson had elucidated how globe skimmers migrate annually from Northern India, or perhaps even across the Himalayas, to East Africa and back. The total distance per cycle is at least 18,000 kilometres and it takes several generations to complete it. An individual dragonfly travels up to 6,000 kilometres during its lifetime, and many individuals fly 3,500 kilometres across the ocean. That is a unique achievement in the insect world.

During flight, migrating dragonflies catch small prey from the sky. They fly at high altitudes, probably using winds that are associated with the so-called Intertropical Convergence Zone. The zone changes position during the year, causing wind and unstable weather.

Now, Hobson took a look at globe skimmers that occur in Japan in summer. They can be found from April to November and occur in large numbers from June to September. Most of Japan is too cold for them in winter, so they don’t hibernate there. When they appear in spring, they come from elsewhere, thousands of kilometres away.

As the wing analyses revealed, the first specimens, in April, probably come from the southwest: South China and Southeast Asia. Later, in the summer, dragonflies arrive from the west: North China and Mongolia, or from South China, North India and the Tibetan Plateau. Might the latter trip be a continuation of the journey that the animals take from East Africa? Unfortunately, the researchers don’t mention it.

Still later, in October and November, dragonflies keep coming from the west; Hobson also found insects from Korea and the east of Russia. Only a few animals had grown up in Japan. The migration appears to be related to the wind direction, which is predominantly westerly in summer.

The wandering existence of the globe skimmer is partly possible because the larvae develop rapidly. While that development takes ten months in other species, the globe skimmer needs about six weeks. And then migration can continue.

This short development time also means that globe skimmer dragonflies are not dependent on areas with permanent water bodies for reproduction. Females can also use temporary water bodies from rainy periods to lay eggs in.