Begin/home » communication » To hear a mockingbird 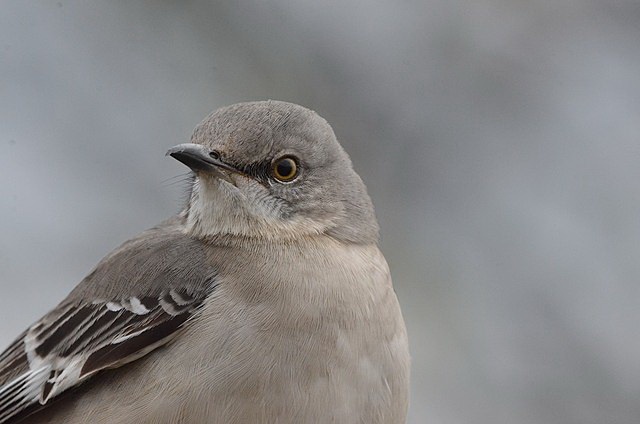 The northern mockingbird has an extremely lengthy, variegated and complex song. Tina Roeske and colleagues explain why we like this song so much.

For minutes on end, the northern mockingbird, Mimus polyglottos, can sing its song. The song is well known in North America, where the songbird is common in gardens and parks. It makes phrases in which it repeats a syllable (consisting of one or a few sounds) several times, like the European song thrush does, and strings the phrases up to a varied and complex whole.

A beautiful musical whole, in our opinion. Tina Roeske and colleagues know why we enjoy it: the bird orders its phrases carefully.

A singing mockingbird has a repertoire of a few hundred phrase types. These include its own tunes, but it also mimics calls and songs of many other birds. In addition, it mimics sounds of other animals and it can even imitate unnatural sounds, such as a car alarm.

And yet, its singing is not a hodgepodge. The researchers – a neuroscientist, a biologist, and a music philosopher – show that adjacent phrases usually are selected in such a way that they have similar acoustic properties; they sound like repeats that are a bit transformed or morphed. The researchers distinguish four modes of morphing that we can clearly perceive.

Two adjacent phrases often have the same pitch and rhythm but differ in timbre (tone quality). For example, the first phrase has clear tones, the next one has some noise in it.

In other cases, a phrase is a repeat of the previous one, but at a different pitch. Or it has a faster or slower pace. Sometimes a combination of morphing can be heard, for instance a phrase that is faster and higher in pitch than its predecessor. And sometimes, a contrasting element is inserted between two similar phrases.

Because successive phrases are usually acoustically related, transitions are subtle, making the song coherent. Composers use the same strategies to add variety to their music. They use instruments with different timbres (for instance flute and violin), repeat a motif at a different pitch (the well-known beginning of Beethoven’s Fifth Symphony) or they change the tempo.

Both mockingbird males and females sing. But males sing more often and more exuberantly; they do it to enchant females. Undoubtedly, they are successful, but exactly what a mockingbird female appreciates in a male’s singing is not known.