Begin/home » defence » Bubble on the head 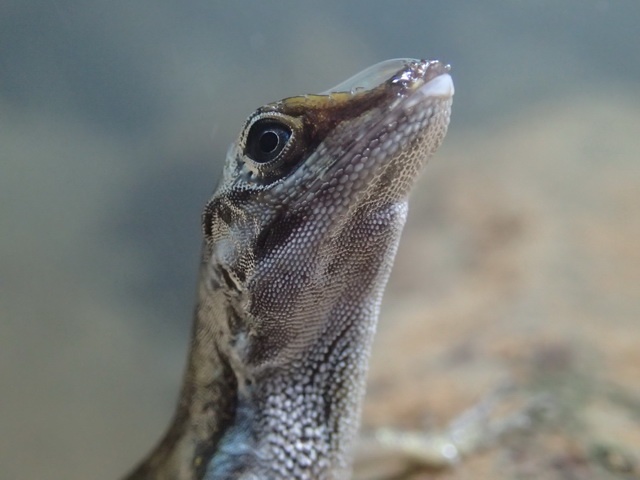 Some Anolis lizard species can stay underwater for a while without drowning. Thanks to a layer of air around their water-repellent skin, they continue to breathe, Chris Boccia and colleagues write.

The water anole, Anolis aquaticus, is not a fast lizard. But it often manages to escape from a predator, such as a larger lizard, snake, or bird. In case of danger, it splashes into the water to be out of sight. Although it may reappear only after more than fifteen minutes, it does not suffer from breathlessness. That is because it makes good use of the air it has with it, Chris Boccia and colleagues show.

The water anole from Costa Rica is one of more than 400 Anolis lizard species which occur in tropical America. Some species, including this one, live close to water and often submerge. The researchers studied how these semi-aquatic species survive submersion and how they differ from species that always remain on dry land.

All Anolis species appear to have a water-repellent skin. If they get into the water, a thin layer of air forms between water and skin across the body surface. In other words, they do not get wet like other lizards. As a consequence, no air bubbles up to the water surface to escape when an anole exhales underwater, as in other animals. Instead, the exhaled air is incorporated into the air layer around the body. This is visible as an air bubble near the nostrils. In the water anole, that bubble appears on top of its snout.

Semi-aquatic species like the water anole use that trapped air. They re-inhale it. And exhale, and inhale, five times at least.

How does that help?

Breathing is necessary to take up oxygen from the air into the blood and to get rid of carbon dioxide. That gas exchange occurs in the lungs. The carbon dioxide exhaled by a diving anole dissolves easily from the air bubble in the water. So, it gets rid of that waste gas.

Also, with each breath, it takes up oxygen from the air bubble, the researchers show: the oxygen content of the bubble slowly decreases. The oxygen supply may be partly replenished if the air that comes from the lungs where it lost oxygen mixes with air that did not pass through the lungs: the air layer around the skin and air from mouth, nose, and windpipe.

And the bubble might act like a gill; perhaps it absorbs oxygen from the water. That will not be enough for a long stay underwater. But it might extend the maximum dive time a bit. A possible indication for this supplemental oxygen is that the oxygen content of the air bubble decreases more and more slowly over time. But that may also be explained by a lowered metabolism underwater, and thus less oxygen consumption.

Terrestrial Anolis species occasionally reuse expired air when submerged, but they do not do so routinely and not for as long as the water anole and other semi-aquatic species – that have to sustain rebreathing until the predator’s patience is gone.

On You Tube, the researchers show it here and here