In bright sunlight, a peregrine falcon can see well thank to malar stripes 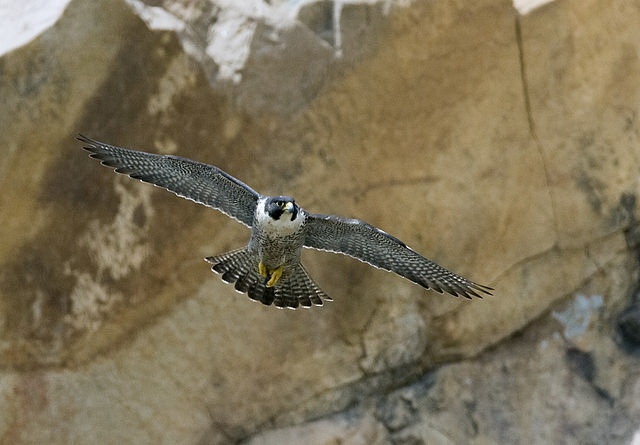 Solar glare can impede vision. Michelle Vrettos and colleagues make it plausible that the black malar stripes of a peregrine falcon are helpful during hunt.

With an impressive high-speed dive, a hunting peregrine falcon descends to capture a prey in mid-air. It is the fastest flier among the birds – it can reach about 350 kilometres per hour in a hunting stoop – and it hunts other birds and bats while flying. Its striking black stripes below the eyes help it to track its fast-moving, agile prey, Michelle Vrettos and colleagues write.

The idea that those black stripes, the so-called malar stripes, are important for sharp vision already existed. Light feathers would reflect sunlight from the cheeks into the eyes, blurring the image, but dark feathers absorb the light. As a consequence, a hunting peregrine falcon would suffer less from solar glare. Other falcon species and some songbirds and hunting mammals have similar dark stripes or an eye mask. And some American athletes blacken their cheeks with eye black to reduce glare and better track fast balls. Does it help?

Apparently, it does, at least in peregrine falcons. Vrettos used photos that were posted on internet of a few thousand peregrines from all over the world; except in Antarctica, the bird is found everywhere. She measured the malar stripes on each photo. And she found that the malar stripes are larger and darker as the average annual solar radiation in the area where a photo was taken is higher. Even though, in sunny areas, dark feathers have the disadvantage that they absorb heat.

Experiments are required to proof that the malar stripes really help vision by reducing solar glare. But the findings are at least striking.