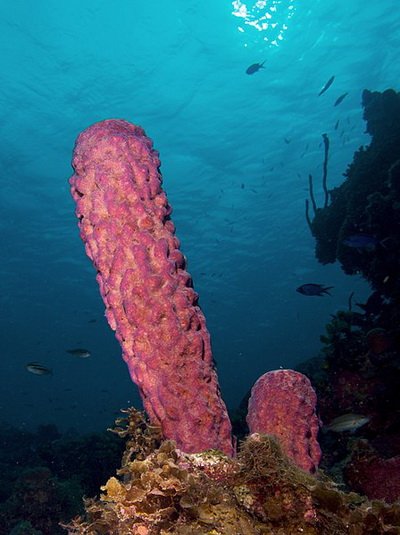 The water from which sponges filter their food also contains oversized and inedible particles. Niklas Kornder and colleagues show how the stove-pipe sponge gets rid of this rubbish.

Sponges are one of the oldest animal groups, and perhaps the oldest. They are simple animals, without organs. Niklas Kornder and colleagues discovered that such simple organisms can keep their body clean.

To obtain food, sponges filter the water in which they live. Water is drawn in through small inlet pores – the ostia – and passes through an internal canal system, where food particles are extracted. It leaves the sponge through larger outflow openings – the oscula.

But water not only contains suitable food particles, but also large chunks and inedible stuff. It was assumed that this waste would be shed with the outflowing water. Kornder now shows that this is not true. It would be risky, as the rubbish may clog the filtration system.

The researchers investigated the cylindrical stove-pipe sponge, Alpysina archeri, which lives in the Caribbean Sea, and video-recorded how it expels waste. It is a large sponge that can grow to a length of one and a half meters.

In the internal canals, waste is embedded in mucus, as it turns out. That mucus is transported to the inlet pores and exits, accumulating at the sponge surface. So, it moves against the direction of the water flow through the canals. On the sponge surface, a weblike pattern of ‘mucus highways’ can be seen, over which mucus streams travel. The streams aggregate into clumps on slightly elevated junctions.

From time to time, a wave of contractions and relaxations propagates across the sponge surface, while the inlet pores are closed: the stove-pipe sponge is sneezing. During the sneeze, the mucus clump is shed off, the sponge getting rid of the waste. And small fish and other animals that live in the vicinity of the sponge enjoy a meal.

The researchers think that other sponges also sneeze to keep themselves clean. However, it is still unknown by what mechanism waste laden mucus is transported.

Watch the sneezing sponge on video