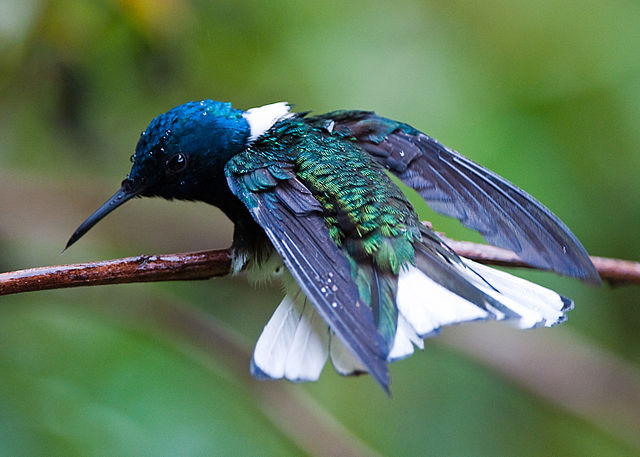 Most white-necked jacobin females are distinguishable from males by a less bright colour. But 20 percent of the females looks like a male. Jay Falk and colleagues wanted to know why they deviate from the normal pattern.

In hummingbirds, a bird family with more than 300 species, males tend to be more brightly coloured than females. But in one in four species, some females have a male-like plumage, as reported earlier this year by the research group that Jay Falk is part of. Now, he tried to figure out why these females dress like a male. He discovered that it enables them to forage relatively undisturbed. They experience less harassment of both conspecifics and other hummingbirds. 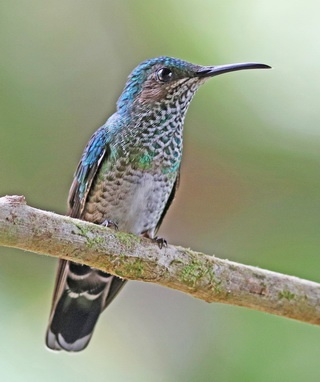 That hummingbird females normally are less colourful than males – though they are by no means dull compared to many other bird species – is because they raise the young. If they are on or around the nest, a dull colour provides safety: their predators detect them less easily. Hummingbird males have no such tasks and are free to seduce females. To be attractive, they have flashy colours, which females like.

But in some hummingbird species, females may have a showy male appearance. The white-necked jacobin, Florisuga mellivora, is an example. About 20 percent of adult females has a shiny blue head, white belly and tail and white spots on the neck like males. Would this confer any benefit?

Perhaps also males prefer a brightly coloured partner, Falk thought at first. But that is not the case, as it turned out when he offered males a choice from several stuffed birds: they prefer a female with normal female plumage.

Another possibility is that brightly coloured birds are less likely to be harassed when foraging. Hummingbirds are small animals with a high metabolism that need to consume large quantities of food. So, the birds spend a large part of the day foraging, sucking nectar from flowers. Competition over food is high, and they are quite aggressive around flowers with a high nectar content. Continuously, they are trying to chase each other away.

White-necked jacobin females in female plumage lose out, according to observations. Apparently, they are not impressive. They are more often chased off than brightly coloured animals, both by conspecifics and other hummingbirds. Conversely, they are less aggressive themselves. In addition, they are likely to be sexually harassed more often. Females in male’s outfit, on the other hand, can forage relatively undisturbed.

Accordingly, male-like females were found to visit a place where nectar was offered more frequently than females in female plumage, and they stayed longer. So indeed, male plumage in females is beneficial because it reduces harassment.

A white-necked jacobin female with male plumage does not look exactly the same as a male. When the tail is fanned, a black tail band becomes visible that is wider in these females than in males. They also have some green on the tail.

There is another indication that male plumage offers protection against aggression: all young are brightly coloured, while young of animal species usually are camouflaged. Male-like plumage also enables young white-necked jacobins to forage without too much trouble.

So, young females are brightly coloured. As they reach adulthood, 20 percent of females retains that colourful plumage, while the majority, 80 percent, switches to a less conspicuous appearance. Why don’t they all keep looking like males if that increases access to food resources?

Probably because it is still true that during the breeding period a female should not be clearly visible, favouring a less bright colour. Young females don’t have that concern yet. 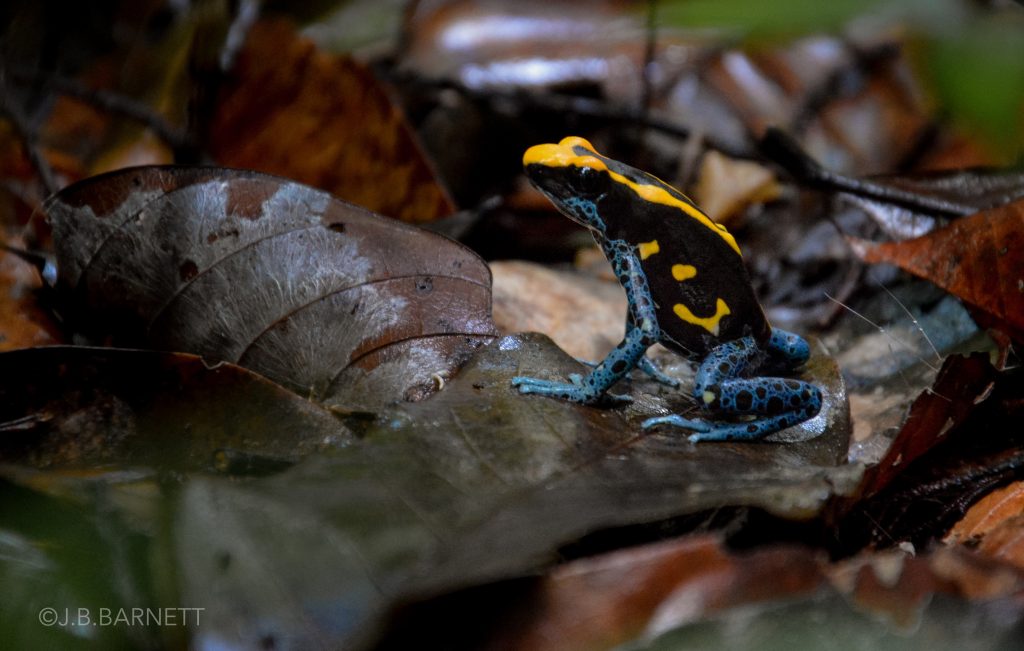 In spite of its bright colouration, predators have difficulty detecting the poison dart frog Dendrobates tinctorius from a distance, according to research by James Barnett and colleagues. The colourful animal turns out to have a cryptic colouration.

Yet, the striking appearance of these frogs does not offer them complete protection, as James Barnett and colleagues point out. An inexperienced predator that doesn’t yet understand the message may attack and kill such frog. Moreover, some predators are insensitive to the poison, and others are so hungry that they ignore the warning and take the risk. So, a poison dart frog needs additional protection.

It has. Additional protection is provided by the same bright and distinctive colour pattern, which appears to function, surprisingly enough, as a cryptic colour that minimizes detectability. At least, this is the case in the poison dart frog Dendrobates tinctorius.

At close range, the frog clearly stands out against its natural background of leaf litter on the soil of rainforests in French Guiana, the researchers show, thanks to colours that are hardly found in that background: yellow and blue. The salient colouration is a clear signal.

But from a distance, things are different. Predators no longer are able to discern the pattern and the colours blend together to form an average hue that matches the background colour. So, the colouration turns out to function as distance-dependent camouflage; it makes the frog invisible to birds, snakes and mammals that are not at very close range.

That may be hard to believe, but experiments show that it really is like that. The researchers made frogs of plasticine (modelling clay) and gave their models either a natural colour pattern or painted it plain yellow or brown-and-black. They assembled different backgrounds: leaf litter, paper with a leaf litter print, bare soil and paper in a homogeneous colour. In the field, they put model frogs on different backgrounds and assessed how often wild avian predators attacked these models.

As expected, background had no effect on the number of attacks on yellow models, while brown-and-black animals were safer on leaf litter or paper with a leaf litter print than on other backgrounds.

And what about the frog models with a natural colouration?

Just like the brown-and-black animals, they had the best chance to remain undetected on a leaf litter background.

The bright colour pattern of the poison dart frog Dendrobates tinctorius thus has a dual function. At close range, it is a warning signal, while the colours blend to form a cryptic colour when viewed from a distance.

Almost no light escapes from of bird of paradise feathers 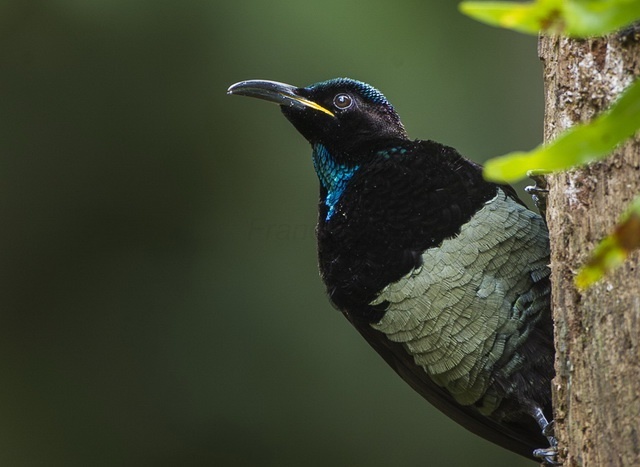 Many birds of paradise have beautiful colours, the brightness of which partly is an illusion, created by dark feathers that surround coloured patches. These feathers are not normal black, but velvety super black, as Dakota McCoy and colleagues show.

Birds of paradise, which mainly occur in New Guinea, deserve their name. The bird family includes many species in which the males have brilliant colours, wear exuberant plumage ornaments and perform exciting dances. With their spectacular appearance, they try to seduce females.

Black feathers play an important role in their courtship, Dakota McCoy and colleagues write. The black feathers that these birds display are not normal black, but super black: they absorb almost all light – more than 99.5 percent – that falls on it. Against this velvety super black background, blue and yellow colours seem brighter than they really are; it looks as if the colours were luminescent. Such super black material is extremely rare in nature.

The researchers show that the deep black appearance is brought about by the special surface structure of the smallest components of the feathers. A feather consists of a shaft on which barbs are implanted, and the barbs are densely packed with barbules. Normally, these barbules are smooth and just bear hooks that interlock to make the feather stiff. The black feathers of crows and ravens have such normal barbules, as do the black feathers of birds of paradise that play no role in their show, such as back feathers.

But the barbules of super black feathers are highly modified. They have very ragged, curled edges with which deep, curved cavities in between, and this structure retains almost all light that falls on it. A normal black surface absorbs 95 to 97 percent of the incident light and reflects the remaining 3 to 5 percent. But in the micro jungle of spikes and cavities of super-black feathers, the light hits obstacles that scatter it again and again, and each time part of the light is transmitted into the material, where it is absorbed. Ultimately, less than half a percent of the incident light is reflected, so the feathers look super black for someone who faces the male – for instance a choosy female.