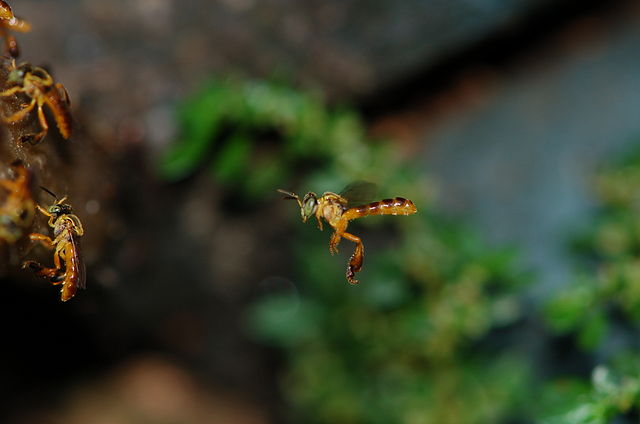 It is difficult for a robber bee to stealthy approach a colony of the stingless bee Tetragonisca angustula, because hovering guards will detect it. These guards arrange themselves in an organized manner, Kyle Shackleton and colleagues show.

Workers of the stingless bee Tetragonisca angustula defend their colony extraordinary well against their enemies. Some workers are dedicated guards; they are heavier than other workers and have longer legs. Such specialised soldier caste is not known in other bee species. And while during the day always guards are standing in or near the nest entrance, there are often also some hovering in front of it to keep an eye on the access route, especially in the afternoon. Such an airmobile brigade is unique too.

The most important enemy is the robber bee Lestrimelitta limao. Robber bee workers do not collect nectar and pollen from flowers themselves, but get it from colonies of other species. They also steal food that is prepared for the larvae and nest constructing material. Tetragonisca angustula, with its large colonies, is vulnerable. No wonder, then, that there are guards that keep an eye on what is near the nest. It is important to deal with an approaching single robber bee at once, because it is a scout. It will recruit hundreds of others for a raid that will last for hours or days.

As more hovering guards are active, such a flying intruder is detected earlier and intercepted at a greater distance from the nest. The guards recognize the robber bee from its odour and colour; it is black and smells like lemon. The guards wrestle it to the ground by clamping to an antenna or wing. They are not able to kill it, because it is three times heavier than a they are. But they may stop it.

Often only a few hovering guards are hanging in front of the nest. Kyle Shackleton and colleagues now show that these guards do not choose their position randomly, but in a coordinated way. If two guards  are hovering, there will usually be one on the left and one of the right side of the access route to the nest. In case of three guards, it rarely occurs that all of them hover at the same side. And four guards mostly are distributed evenly; sometimes sometimes three guards hover at the one side and one at the other side, and it hardly happens that all four guards are at the same side. Because of this coordinated distribution, the hovering guards have a maximal field of view and they will discover an approaching flying enemy as fast as possible.

In case of immediate danger, more guards will be hovering in front of the nest. An even distribution between left and right is less important in that case, because together they will have a good view anyway. There is no surveillance at night, for in the evening the bees close the nest entrance with wax.