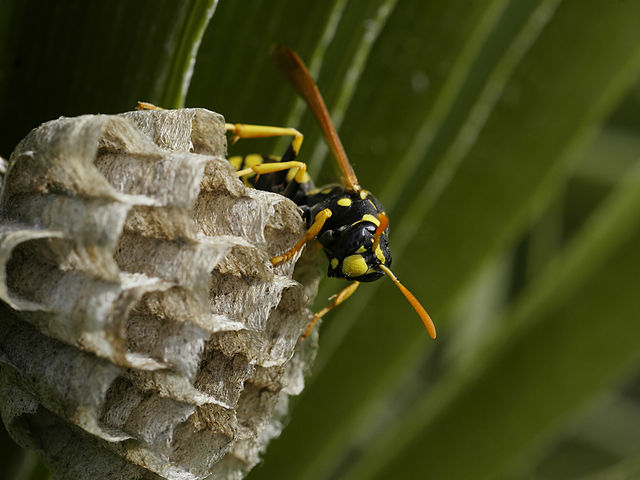 The life cycle of the parasite Xenos vesparum is closely linked to that of the wasps in which it lives. It modifies their behaviour in such a way that it meets its needs, as Laura Beani and colleagues demonstrate.

It is often creepy as well as fascinating to see how parasites control their host. A nice example is Xenos vesparum, parasite of the European paper wasp (Polistes dominula). Its manipulation skills are being unravelled by Laura Beani and her colleagues.

The parasite, which belongs to the insect group of twisted-wing parasites, has a bizarre life cycle, with a striking difference between males and females. In the larval stage, the parasite lives within a wasp host. Males pupate in their host; the front part of the pupae extrudes trough the cuticle between the plates of the host’s abdomen. When adult males emerge, they leave their host to live freely; within a day, they die.

Females live much longer. They remain in their host and don’t pupate, but turn into a ‘bag’ filled with egg cells and a fat supply. Only their cephalothorax, into which head and thorax are fused together, is tough and visible between the plates of the host’s abdomen. Usually only one parasite, either male or female, will mature in a parasitized wasp.

Male and female parasite must mate on the wasp in which the female lives. They do it fast.

Xenos parasites effectively exploit the annual cycle of their host. In March, fertilized wasp queens, which have spent the winter in groups, awaken. Every queen occupies a place to establish a colony. She builds an open nest and lays the first eggs, which will produce workers. Before these eggs have developed into adults, the queen also has to collect food and take care of the brood. But later, from May, she is just laying eggs, while the workers, who don’t reproduce themselves, do the rest of the work.

Then the queen has finished her task. She stops and the colony collapses. The gynes leave the nest and in early autumn, they aggregate in groups that attract males. Mating follows. As winter approaches, the fertilized gynes search for a sheltered place, again aggregating; they often cluster in buildings, for example under roof tiles. There they hibernate and wait for the spring. Males and worker wasps die before winter. In March, the new queens awaken from winter diapause and the cycle starts again.

The European paper wasp is a common species, and it is not as annoying as the common wasp, Vespula vulgaris.

The parasite disturbs the role pattern of its host. But not immediately. In May, tiny parasite larvae penetrate into worker wasp larvae, which appear to be little affected by the presence of the parasite. Only when the hosts have developed into a pupa, the parasite larvae undergo a growth spurt and mature.

And then the manipulation starts: parasitized workers do not stick to their role. They are lazy and at the age of one week, they will leave the nest.

Parasite embryos develop within the fertilized parasite females in a wasp’s body and new parasite larvae emerge at the end of July. A female parasite releases more than three thousand larvae which all need a host to develop. When healthy foraging wasps pass by, larvae cling to them, are transported to the wasps’ nest and start searching for wasp larvae. Among infected wasp larvae, there will now be putative males and sexual females, which were destined to reproduce. But they will never do the job, as the parasite castrates them.

From mid-July on, parasitized wasps (workers, males and gynes) form groups outside the nests, just like healthy young sexual females will do later in the season: the role pattern is erased. They gather on high plants and later on buildings, usually places where healthy males gather every year or where future queens use to overwinter. The parasitized wasps are inactive, the parasites have much opportunity to mate.

When healthy sexual wasp females fly out and aggregate, they often join these groups of parasitized wasps.

At the end of the season, when the gynes have been fertilized and gather at places to hibernate, wasps that contain a fertilized parasite female will join them. Parasite females safely spend the winter in a wasp body, in a group of wasps on a sheltered place. Wasps that carried a parasite male have no function anymore; they die in autumn.

When healthy young queens leave to establish a colony in spring, parasitized wasps are left behind. A few weeks later, when the first wasp larvae have hatched in wasp nests, the parasites release their larvae. They then apply a last manipulative trick: they induce their host wasp to deliver the mature larvae in several young wasp nests. There are still no adult workers to defend these nests and the queen is often gone to collect food. From within her host, the parasite female drops larvae in the nests. She also drops some larvae on plants, as a foraging wasp may come along and take them with it.

And so the Xenos parasite completes the circle – with enforced cooperation of the host.