Termites that grow fungus for food manage to keep their crops free from pests, such as weeds, pathogens and fungus-eating nematodes, Saria Otani and Natsumi Kanzaki and their colleagues report. Bacteria in the termites’ gut play a role in pest control.

Some termites species practice agriculture by growing a fungus in their nests for food. And just like human farmers, they have to protect their crop against pests. As is known, they perform well. Saria Otani and colleagues show how a number of African termite species keep their fungal gardens free from non-edible, proliferating or pathogenic fungal species. And Natsumi Kanzaki and colleagues report that the Asian termite Odontotermes formosanus suppresses fungus-eating nematodes.

One way by which the termites control these pests, is by ingesting the plant material on which they grow the fungus crop, so that it passes through their gut. Gut bacteria produce substances that inhibit harmful fungi and nematodes, to ensure that the pre-digested stuff is pretty clean.

Just like ants and some bee and wasp species, termites are eusocial. They live in large colonies that can exist for decades. Most residents are sterile: they are either workers that maintain the nest, take care of the brood and forage for food, or soldiers that defend the nest. Reproduction is a privilege of the royal couple, that has no other duties. The queen is nothing more than an egg laying machine, the king’s task is to mate with her.

Winged sexual individuals (alates) appear once a year. They make a nuptial flight, and couples form that may found a new colony. 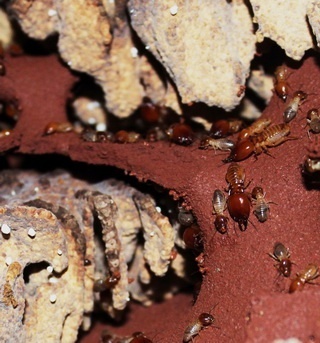 More than three hundred species of termites from Africa and Asia have a special way of life: in indoor gardens, they grow fungi in highly productive monocultures. In these species, the workers have the additional task of taking care of the crop. They forage for tough plant-derived material on which they grow the fungus: dry grass, wood and leaf litter. The gardeners consume the stuff and deposit it with their faeces on top of the garden. They are unable to degrade the cellulose and lignin of plants, but the fungus grows well on the pre-digested and fertilized material. It forms nutritious buds, the nodules, which are consumed by the termites. The nodules contain asexual spores, which pass the termites’ gut undamaged; by dropping them on top of the fungal garden, the termites maintain the crop. They also consume older, lower garden parts that are whitish with fungal mycelia.

Both termite and fungus profit from this agriculture: it is a mutualistic relationship. The fungus has a safe and comfortable living place, the termites have a food supply. But a problem is, that the well attended fungal gardens are suitable as a living place or food source also to other parties.

A garden, for instance, is attractive to fungi that are of no use to the termites, but are competitive with or pathogenic to the crop. The plant material that the workers bring in from the field is not free of such species. Yet, Otani could hardly find harmful fungi in the gardens of three African species, including Macrotermes natalensis. He shows that both the fungal crop and the garden contain substances that inhibit the growth of foreign fungi.

The termites do not synthesize such substances, but their gut bacteria do. By eating the plant material before provisioning the fungus crop, the gardeners probably subject it to a cleaning process. Gut bacteria are deposited on the garden with the faeces, and continue to produce fungicidal substances.

Because the fungal crop is full of carbohydrates, proteins and fats, it is an attractive food source for other animals, such as fungus-eating nematodes. Their presence would reduce the harvest. Natsumi Kanzaki shows, in the Asian termite species Odontotermes formosanus, that workers that leave the nest to forage for plant material often carry such nematodes upon return, as does their load.

The fungal crop is not toxic to the nematodes. But they don’t get a chance to eat it, because the termites will groom returning colony mates to remove hitchhiking nematodes. Also, the foragers are not in direct contact with the garden. And when the gardeners consume the new plant material, gut bacteria will suppress nematodes that cling on it.

Termite farming originated in Africa. The farming is obligate for both partners: fungi-growing termites and cultivated fungi no longer are capable to live on their own.

Although termites look a bit like ants, they are not related to them. On the evolutionary tree of life, they are close to cockroaches. That is why certain differences exist between termites and ants. Whereas male ants are not engaged in colonial life (all workers are females), sterile male termites help their nest mates as workers or soldiers. Juvenile termites do not go through larval and pupal stages, but are nymphs, small versions of adult animals.