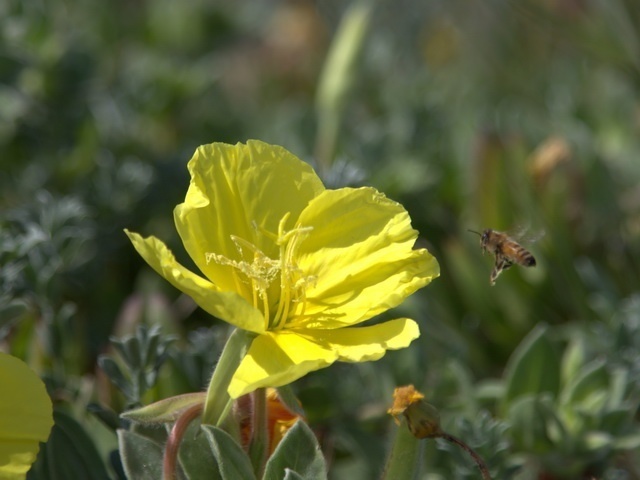 When a flying moth or bee is close to the evening primrose Oenothera drummondii, the flowers detect their buzz. Within minutes, they will produce nectar that is more rich in sugars, Marine Veits and colleagues discovered.

Plants have no ears and therefore they are unable hear. Yet, as it turns out, they perceive sound. The wing beats of a passing moth or bee produce sound waves that are detected by the beach evening primrose Oenothera drummondii, Marine Veits and colleagues show. Rapidly, the plant will change the quality of its nectar  by increasing the sugar content. The researchers suspect that, by doing so, the plant increases its reproductive success.

The beach evening primrose, which grows on beaches in Israel, relies on insects for the pollination of its flowers, to be able to set seed. It blooms at night and attracts hawk moths. Flying from flower to flower, they pick up pollen from one flower and deliver it on the pistil of the next one. At dusk, bees visit the flowers.

To keep the pollinators busy, plants must maintain a supply of nectar as a reward for their services. Preferably no soft stuff, but an energy drink: nectar with a high sugar content. But it takes the plant energy to synthesize it, and there is a risk that the precious nectar will be degraded by microorganisms or robbed by ants if it is not picked up by pollinators soon enough.

So it would be nice if a plant would produce high-quality nectar only if there were pollinators nearby. But how can it know?

The researchers hypothesized that plants might be able to detect the sound waves produced by the wing beats of flying insects and respond to it. An unusual idea, but with a series of experiments they showed this to really happen.

When they played back the recorded sound of flying bees to a beach evening primrose plant, the yellow petals of the flowers started vibrating. Soon after, within three minutes, the sugar content of the nectar had increased; before the sound, the flowers produced nectar with a sugar concentration of 16 percent, after the buzz it was 20 percent. Artificial sound at frequencies similar to the sound of flying moths and bees had the same effect, but sound with much higher frequency did not. Nothing happened in silence either.

The nicest test perhaps was with flowers that were contained in soundproof glass jars padded with acoustically isolating foam. These flowers did not respond when the sound of a bee or moth was play backed.

An increased sugar content is an extra reward for flower visitors. They probably will stay longer or go on to visit another flower of the same species. That increases the chance that they pick up or deliver pollen, augmenting the plant’s reproductive success.

If an insect passes by, it does not necessarily make sense for a plant to rapidly increase the sugar content of its nectar. That is only useful if this insect will remain in the area for a while or if it is not alone, because in that case, pollinators will taste the sweet nectar. Video recordings in the field showed that when one insect passes by, there usually are others around. If the weather is fine, many bees or moths are active simultaneously.

Now, more fieldwork is needed to assess whether the evening primrose’s response to insect buzz actually results in more offspring.