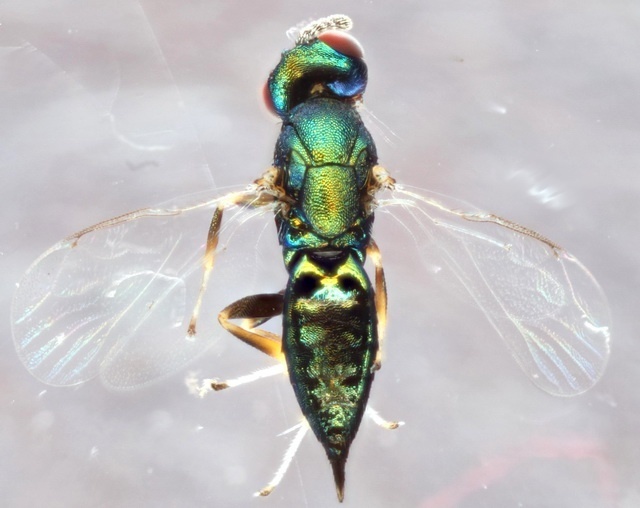 The parasitoid wasp Euderus set lays its eggs near oak gall wasps that develop within their gall. The parasitoid larva will consume its host. But first, the larva manipulates it into performing a nasty task. Otherwise the parasitoid would be buried alive in the oak gall.

The North American parasitoid Euderus set is a natural enemy of gall wasps that develop within galls on oak trees.  It does not attack all oak gall wasps species; hundreds of oak gall wasp species live in North America. But at least seven species fall victim, as Anna Ward and colleagues report.

The researchers discovered the wasp several years ago and named this ‘crypt-keeper wasp’ after Seth, the Egyptian god of darkness and chaos. According to some sources, Seth killed his brother Osiris by trapping him in a tailor-made sarcophagus and throwing him into the Nile. The behaviour of the parasitoid  wasp is as naughty. One of the victims is the oak gall wasp Bassettia pallida, and the researchers described what happens to the galler when Euderus set appears on the scene.

The gall wasp female lays her eggs under the bark of young oak branches. A branch then is induced by the gall wasp to form a separate crypt for each egg, in which the wasp will develop into a larva, pupa and adult. A gall develops in the branch. The adult gall wasp has to chew its way out through woody tissue and bark.

The researchers found holes in oak branches through which an adult gall wasp had emerged. But they also discovered holes in which the head of a gall wasp was stuck. It was a mystery: why did the gall wasp sometimes get stuck?

Here is what happens, according to the authors: a female parasitoid lays an egg in the chamber of a developing gall wasp; after hatching, the parasitoid larva will eat its gall wasp host when it has reached adult stage. But first, it makes the host do some work. The parasitoid induces the young gall wasp to excavate an emergence hole that is narrower than normal. As a result, the gall wasp gets stuck as soon as its head reaches the surface; the head plugs the exit hole. The parasitoid then consumes its host entirely, pupates, emerges as adult parasitoid and leaves the chamber via the empty body and stuck head of the gall wasp.

How the parasitic wasp manipulates the behaviour of its host, is still unknown. But it is to its advantage, because there is little chance that it can chew its own way out through woody plant tissue and bark, as experiments showed. Without a passage in the form of the empty gall-wasp body and head, the parasitoid wasp would be buried alive.

Now, Ward showed that not only Bassettia pallida, but at least six other oak gall wasp species can be attacked by Euderus set. They live in similar galls that are integrated with an oak branch or leaf and that have no structures to keep enemies out, such as spines. This makes makes them vulnerable to Seth.

On YouTube, the research group explains how parasitoid Euderus set manipulates its host