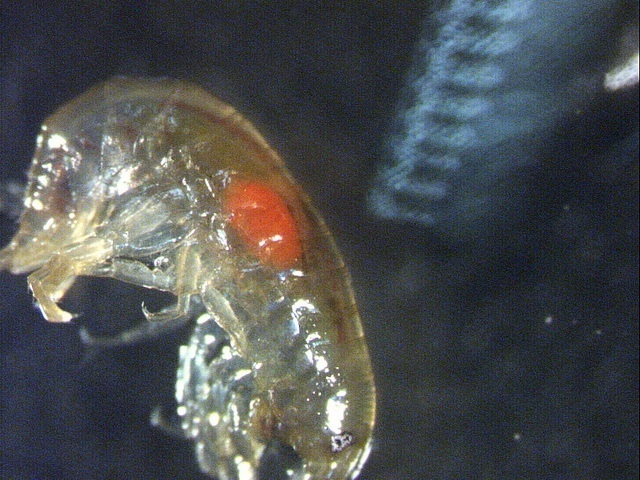 When fresh water shrimp is parasitized by thorny-headed worm, the parasite is visible from the outside as an orange dot. Thanks to this striking spot, fish will easily detect the shrimp and ingest it, whereupon the parasite completes its development in the fish. According to Timo Thünken and colleagues, only fish that are suitable as hosts preferentially swallow infected shrimp.

The thorny-headed worm Pomphorhynchus laevis is a parasite with a complex life cycle, which takes place in fresh water. During the first part of that cycle, it develops within fresh water shrimp Gammarus pulex, after the shrimp ingested parasite eggs from the water. The parasite develops to a certain stage, the cystacanth. 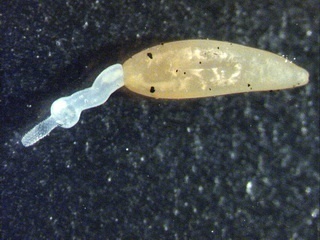 When the parasite has reached that stage, Gammarus no longer can serve as a host. The parasite has to switch to fish to be able to complete its life cycle. In the new host, the parasite hooks onto the intestinal wall, matures and reproduces. Female parasites produce eggs that are released together with fish faeces, completing the cycle.

The switch from shrimp to fish can happen in only one way: fish must ingest parasitized shrimp. Timo Thünken and colleagues show how the parasite manages this process.

Normally, Gammarus pulex, no more than 2 centimetres in length, try to avoid being swallowed by fish. The shrimp hide in darkness, avoid areas with fish odour and have an inconspicuous colour.

But a parasitic thorny-headed worm that reached the cystacanth stage will intervene. It changes the behaviour of the host that it no longer needs; the shrimp leave darkness and show a preference for water with fish odour. Moreover, the mature cystacanth turns orange, being visible from the outside as an orange dot on the host.

Parasitized Gammarus seem to offer themselves as prey to fish: fish will easily encounter them and detect them. And indeed, they consume many parasitized shrimp, as was shown earlier in three-spined stickleback. For Gammarus, this is the end of the story, but for the parasite the future is opened.

At least …. if it has ended up in a suitable host. Not all fish species that prey upon Gammarus are a suitable host for the parasite. It will not survive in fish that exhibit an effective immune response. Manipulating Gammarus confers a lower net benefit if it also increases the chance of the parasite to end up in the wrong host.

Now, Thünken shows that the manipulation is effective: only suitable host fish ingest a relatively large amount of parasitized Gammarus.

He discovered this in experiments in which he painted an orange dot on unparasitized shrimp, so that they looked like shrimp carrying a ripe cystacanth. He then offered these shrimp, together with unpainted conspecifics, to a number of fish species. The painted shrimp were not really parasitized, and so they behaved the same as the unpainted ones. In this way, Thünken was able to check whether all fish species, just like stickleback in the earlier experiments, preferentially eat coloured prey.

In another experiment, he fed parasitized Gammarus to fish. Four months later, he checked if the fish were carrying living parasites, in order to assess which fish species are suitable hosts.

One of the fish species used, barbel, mainly consumes Gammarus with an orange dot, as it turned out, so this fish will easily get infected with the parasitic thorny-headed worm. This is beneficial for the parasite, because barbel turned out to be a very suitable host.

Brown trout, on the other hand, was as likely to swallow painted Gammarus as unpainted shrimp; the colour change had no effect on this fish. That’s also beneficial, because brown trout turned out not to be a host in which the parasite can survive. The same findings – indifferent to the colour change, poor host – applied to two other fish species, perch and ruffe.

Conclusion: an orange dot on Gammarus has an effect on fish that can serve as host of the horny-headed worm, barbel as well as stickleback in the earlier tests. These fish consumed colour Gammarus relatively often. But for unsuitable fish – brown trout, perch and ruffe – it makes no difference whether their prey has an orange spot or not. So, the dot increases the chance that the parasite will switch to a suitable host without increasing the risk that it will end up in the wrong fish.

How the link between the fish’s sensibility to the prey colour and its suitability to act as host might have arisen, is another question which has not yet been answered.

Stickleback are suitable hosts, but they do not fully meet the pattern. In the new experiments, not all stickleback seem to preferentially consume Gammarus with an orange dot; some even avoided them. With regards to this fish species, the colour alteration of Gammarus can be counterproductive.

According to the researchers, this is because this small fish suffers more from parasitic infection than the other species, which are considerably larger. Stickleback living in an environment in which thorny-headed worm is abundant are likely to avoid infection by skipping coloured Gammarus prey from their diet, warned by the orange colour. For larger fish species, on the other hand, avoiding parasitic infection is not important enough to let prey go.