When yellow warbler is warning, red-winged blackbird will attack 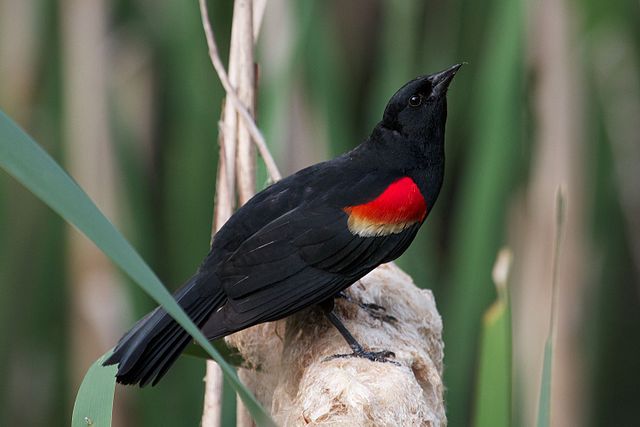 The yellow warbler utters a specific alarm call when a brood parasite is nearby. The red-winged blackbird picks up the signal and attacks, as Shelby Lawson and colleagues write. Together, the birds protect their nests. 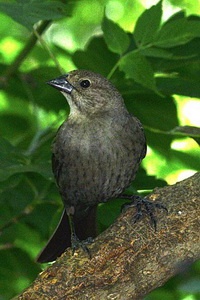 A bird’s nest with eggs or young is vulnerable. One of the dangers is that a heterospecific bird will lay an egg in it and charge the parents with the care of a foster young, like the cuckoo does. The red-winged blackbird, which breeds in wet areas in North and Central America, runs such risk. Here the brown-headed cowbird is the ‘cuckoo’, the brood parasite.

Although a young cowbird, unlike a cuckoo chick, does not eject its foster brothers and sisters out of the nest, its presence is to their detriment. The foreign chick demands so much attention that the legitimate young will suffer and starve or fledge in a bad condition. 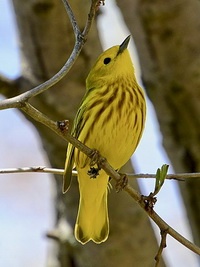 When yellow warblers detect a brown-headed cowbird, they utter a specific alarm signal, a ‘seet’ call. Upon hearing that call, all females respond appropriately: they immediately return to their nest (if they were not already there), repeat the seet and sit tightly on their clutch. As a consequence, a cowbird has no access.

Yellow warblers utter the seet call only in response to the brood parasite and only during the breeding period. To warn of predators, they have a different signal, and upon hearing that call, females will change perches and remain alert, but they won’t return to the nest. The combination of the specific alarm signal for brood parasites and the appropriate response of females is unique.

The researchers wondered whether red-winged blackbirds eavesdrop on that specific signal and take advantage of it. They play backed different sounds nearby redwings’ nests and observed their responses.

Both redwing males and females became aggressive upon hearing the seet of yellow warblers and attacked the speaker. They reacted as heated as in response to the chatter of brown-headed cowbirds. Also the call of a blue jay, a nest predator, aroused their aggression. Apparently, the response to the seet call is a general defence against various dangers that threaten a nest. The birds neglected the song of an innocent songbird.

Chatter of other redwings elicited the strongest defence response; the birds seem to consider conspecifics that invade their territory to be the greatest risk.

So far, the red-winged blackbird appears to be the only bird species that understands and responds to yellow warblers’ warning of brood parasites.