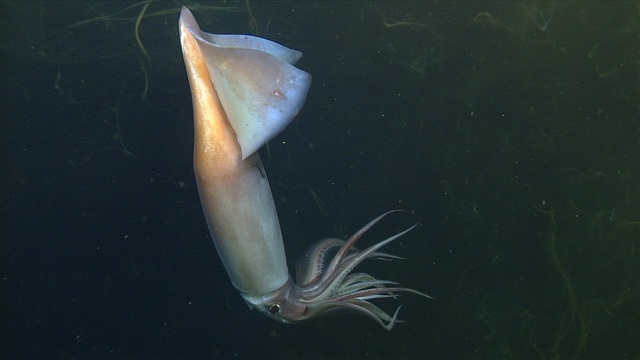 It is difficult to communicate visually in the dark of the ocean, but Humboldt squid can do it, as Benjamin Burford and Bruce Robison show. It makes pigmentation patterns on its body visible by switching on backlight.

Humboldt squid or jumbo squid, Dosidicus gigas, is a social animal: individuals form groups to hunt prey, for instance lantern fish. Joint hunt requires good coordination, so that the whole group will swim in the same direction and decelerate synchronously to catch prey. And the squid manages to do so, without the animals bumping against each other or attacking each other, Ben Burford and Bruce Robison observed. Apparently, the animals communicate effectively.

This is remarkable, as the squid mainly lives in the dark. It spends the day hundreds of meters below surface and ascends to the surface only at night. So how do the animals communicate, the researchers wondered.

Squid species that live in light conditions are known to exchange messages with colour patterns on their body. Their skin contains chromatophores, small elastic bags filled with pigment that can be expanded. It was already known that Humboldt squid has chromatophores in one colour, reddish-brown. This enables it to display white-red patterns. But how can the animals show these patterns to each other in the dark?

By turning on backlight, as it turns out.

Burford and Robison studied the behaviour of the animals by filming during daytime at great depth with a camera mounted on a remotely operated vehicle and analyzing the footage.

In addition to chromatophores, Humboldt squid has so-called light organs, with cells that can produce light; this is called bioluminescence. Many deep-sea inhabitants have light organs in the skin, usually located at certain places, and convey messages by changing light intensity. For example, they show a pattern of spots indicating what species they are, they give a light show when courting, they flash to scare off an enemy or they lure prey with a lantern.

Humboldt squid uses bioluminescence in a different way. Its light organs are not embedded in, but located underneath the skin. And they are not located in certain places, but spread all over the body. By making its entire body glow yellow-green, Burford and Robison assume, Humboldt squid creates a backlight that reveals the white-and-red pattern of the chromatophores in the skin. It functions like an e-reader.

The squid has a whole repertoire of pigmentation patterns, as was already known. It can flash and flicker. It can make its caudal fins contrast with mantle, head and arms, or make the edge of the fins stand out; it can show stripes along the side of the mantle or on the arms, or create a stain between the eyes. Certain patterns are displayed only when the squid is hunting in a group, and some patterns appear in a fixed order. So, the system seems to enable complex, advanced communication.

The next challenge is to decipher that language. The camera used was not light-sensitive enough to read the patterns in detail, and it is still unknown how the animals respond to each other’s messages.

Photo: A Humboldt squid shows its colours in the lights of a remotely operated vehicle 300 meters below the surface of Monterey Bay. ©2010 MBARI

From so simple a beginning of Willy van Strien is licensed according to Creative Commons Attribution-NonCommercial-NoDerivs 4.0 International-license