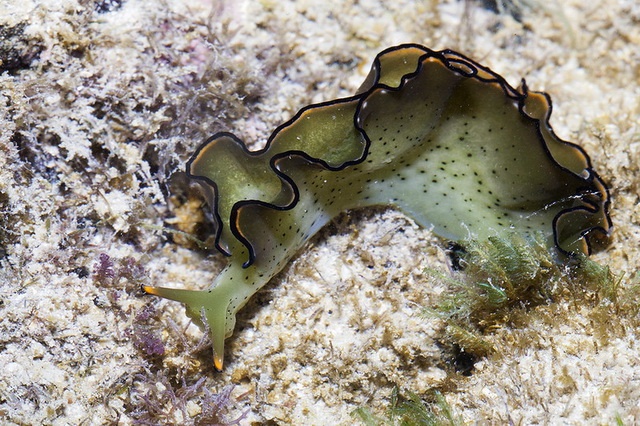 Sea slugs Elysia marginata en Elysia atroviridis can decapitate themselves and regrow a new body from the loose head, Sayaka Mitoh en Yoichi Yusa show. A bizarre phenomenon. Why do they do it, and how do they survive?

Sayaka Mitoh and Yoichi Yusa must have been dumbfounded when seeing sea slugs that they kept in their lab, species Elysia marginata, sever their heads from their bodies. The loose heads moved around, as they report. After a day, the wounds were closed. In some cases, especially in young sea slugs, things got even crazier: the head began to feed; after a week, a new body started to grow and in three weeks it was complete.

The loose bodies also moved for a while, sometimes even months, but eventually they decomposed. No new head appeared on any loose body.

There are more animals that can regrow a missing body part, such as a lizard that shed its tail or a fiddle crab that lost a claw. But this – regenerating almost an entire body – is very extreme. These sea slugs even have a groove behind the head as a predetermined breakage plane for self-decapitation. Why do they do it?

In any case, it is not to escape from a predator, like a lizard sheds its tail when a predator grasps it. The sea slugs take hours to separate body from head; that is not effective to avoid predation. And when the researchers simulated an attack by teasing them, nothing happened. The animals have a different defence mechanism against predators: they are poisonous.

The reason for self-decapitation became clear by observations on wild-caught specimens of a related species, Elysia atroviridis. Once in the lab, some of them shed the whole body, and these specimens turned out to contain a parasite, a copepod of the genus Arthurius. It is a large parasite that occupies almost the entire body of its host. In fact, a parasitized sea slug has already lost its body. If it sheds it, it will get rid of the parasite while losing almost nothing more.

But how does it survive without organs such as heart and kidneys? This has to do with a special property of sacoglossan sea slugs, to which Elysia belongs, the researchers suppose. They extract chloroplasts from algal food and incorporate them in special cells that line their highly branched digestive gland. The head also contains chloroplasts. Thanks to the chloroplasts, which they need to survive, these sea slugs can endure a period without food, it was known.

It is a mystery how exactly they utilise the chloroplasts. The chloroplasts continue to do what they do in plants: they convert carbon dioxide into carbohydrates with the help of sunlight, a process called photosynthesis. Whether the sea slugs can survive on sunlight as a result, just like plants, is a matter of debate.

Regardless, it may well be thanks to the chloroplasts that a loose head of Elysia marginata and Elysia atroviridis survives.

Parasitized Elysia sea slugs shed their worthless bodies. But they only manage to grow a new one from the head when they are young. The loose head of an older specimen does not feed and does not grow, but will die within ten days. Shedding and regrowing a body is not a recipe for eternal life.