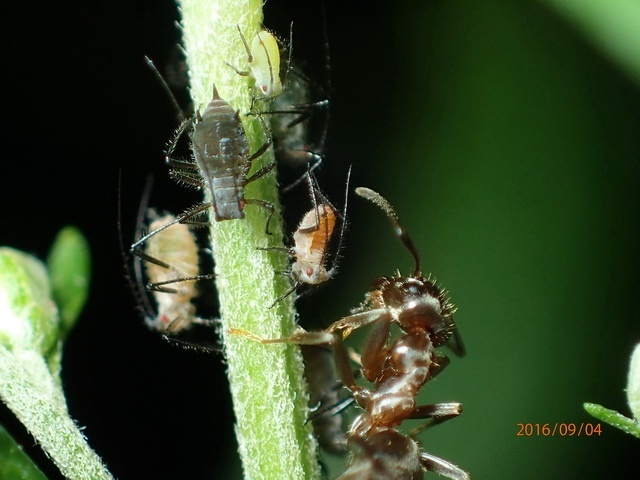 A Japanese mugwort aphid colony makes ants more aggressive, as Tatsumi Kudo and colleagues show. As a result, enemies have less opportunity to feed on the aphids.

The cooperation between aphids and ants is one of the best-known examples of cooperation or mutualism. Aphids, which feed on the plant saps, excrete excess sugars in a sticky substance, the honeydew. This is a great food source for ants. They collect the honeydew: they milk the lice. To secure the harvest, they protect the aphids from predators, as if it were their livestock. The parties thus exchange food for protection, and both sides benefit from this cooperation.

Such mutualism exists between the Japanese mugwort aphid (Macrosiphoniella yomogicola), which feeds on mugwort (Artemisia montana), and several ant species, of which Lasius japonicus is the most important one. This aphid manipulates the ants that protect it into becoming more aggressive against predators by excreting dopamine in their honeydew, Tatsumi Kudo and colleagues discovered. In other words: the aphids manipulate the behaviour of the ants.

The researchers detected dopamine in the honeydew of the aphids, a substance that acts on the nervous system. The crop of ants that harvested the honeydew also contained dopamine.

And that affected the behaviour of the ants. The researchers conducted experiments to find out how aggressive ants were towards the Asian ladybird (Harmonia axyridis), a major predator of the aphids. Shortly after visiting an aphid colony, ants were more aggressive than ants that had not visited aphids. As other experiments show, this is due to the dopamine. In these experiments, administration of dopamine made the ants more aggressive than normal, whereas artificial honeydew without dopamine did not.

So, both the Japanese mugwort aphid and the ant Lasius japonicus that protects it benefit from their mutualistic relationship. The aphid forces the ant to provide better protection, the ant manipulates the aphid colony so that an extra amount of high-quality food is produced.

The relationship with ants is especially important for the aphid. A colony wouldn’t survive without its ant bodyguards.

On YouTube: ladybird larva consuming aphids is bitten by an ant

See how the ant manipulates the aphid colony