Without flying fox no fruits on Dillenia tree 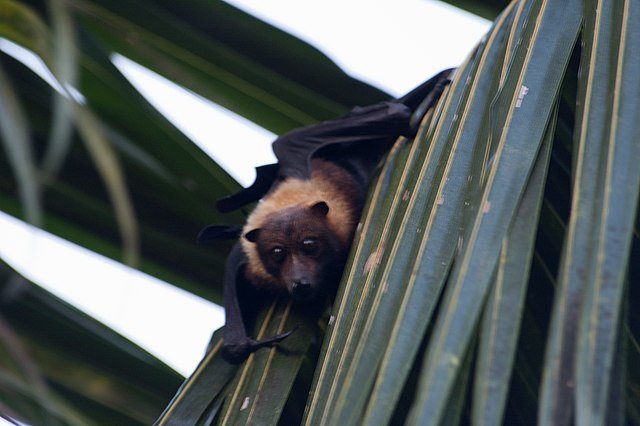 The flowers of the tree Dillenia biflora cannot open on their own. That means that the pollinator, a flying fox, has an extra job to do, Sophie Petit and colleagues write.

The relationship between a plant and its pollinators can be special, and the tree Dillenia biflora may have one of the most remarkable. Its peculiar flowers cannot open. Their petals are fused and form a globose corolla, a lid that covers the anthers and stigma.

Dozens of Dillenia species exist that are pollinated by bees that come to collect pollen; these species do not offer them nectar. So, it was a mystery what happens in Dillenia biflora with its permanently closed flowers and inaccessible anthers. There must be pollinators, because the tree produces fruits with seeds and the flowers cannot self-pollinate. Sophie Petit and colleagues wondered: who are the pollinators, and how do they do it? 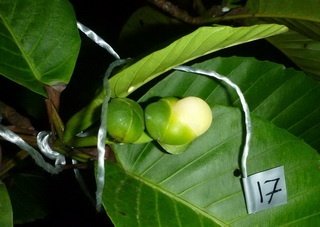 The flowers produce scent, are pale-coloured, large and stout and last only one night. People had noticed large bats, or flying foxes, near the trees at night, and pollen was found in flying fox droppings. These findings suggested that these animals play a role in pollination. On the floor, corollas can be found with four tiny holes.

To find out what happens, the researchers placed video cameras near trees at night, when flying foxes are active. They conducted their research on Fiji’s two largest islands, Vanua Levu and Viti Levu, where Dillenia biflora grows in rainforests.

The footage was clear. Trees are visited at night by the Fijian blossom bat Notopteris macdonaldi, which roosts during the day in large groups in caves. The animals grasp the lid of a flower with their four long canines, pull it away and drop it. Hundreds of anthers and a stigma then are accessible.

A flying fox has good reason to do the job: unlike those of related species, the flowers of Dillenia biflora turn out to contain a copious amount of nectar. While the animal is drinking, its snout gets covered with pollen, part of which ends up on the stigma of the next flower it visits. That flower is then pollinated and will form seeds.

It is beneficial for a flower to remain closed. The contents then are safe from rain, from insects that feed on them, and from moths and geckos that sip nectar without pollinating the flowers.

The researchers suspect that more Dillenia species have a similar exclusive relationship with flying foxes, because more species exist with flowers that do not open. They also think there are more bat species that open the flowers and enjoy the hidden food source, such as the Pacific flying fox, Pteropus tonganus.

These trees are completely reliant on nectar-feeding bats that remove the corollas: without their visit, the flowers are aborted and don’t reproduce. Conversely, nectar is the main food source for these flying foxes. That has implications for nature conservation. Many Dillenia species are threatened, and to conserve them, it is necessary that the bats do well. In turn, the flying fox Notopteris macdonaldi is a vulnerable species, and its conservation requires that the trees do not disappear.