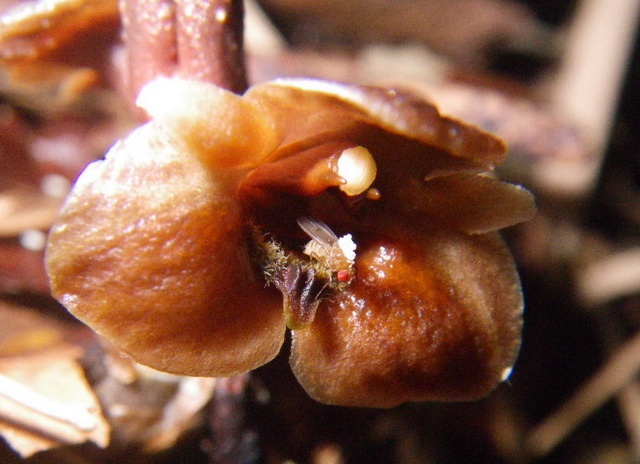 The orchid Gastrodia pubilabiata lives at the expense of other species. It steals sugars from fungi, which also attract fruit flies that provide pollination service, as Kenji Suetsugu shows, without receiving any reward in return.

While most plants produce sugars from carbon dioxide using energy from sunlight in a process called photosynthesis, the orchid Gastrodia pubilabiata leaves the job to others. The small and inconspicuous plant, which grows in Japan and Taiwan, does not have green leaves, as it lacks chloroplasts, the cell organelles that conduct photosynthesis. With its roots, it steals sugars from the underground hyphae of a number of mushroom forming fungi species; the fungi obtained these sugars from dead organic material. The fungi get nothing in return.

And while most plants produce nectar as a food resource for insects (or other animals) that pollinate the flowers in return, this orchid doesn’t. To be pollinated, it exploits fruit flies (Drosophila species) without rewarding them.

The flies need fermenting fruit or decaying mushrooms to lay their eggs in, and their larvae will consume that stuff. Apparently, the brown-coloured flowers of Gastrodia pubilabiata smell like fermenting and decaying substrates, as the flies are deceived into laying their eggs on the flowers. Consequently, the larvae will find no suitable food and die. But the orchid has been served. While visiting a flower, the flies pick up pollinia, masses of pollen grains, which they deliver to the next flower they visit, thereby pollinating that flower.

The orchid thus takes nutrients from mushrooms and is pollinated by fruit flies, and neither of these partners receives any reward for its services. Both are victims of a parasitic and deceptive plant.

Now Kenji Suetsugu shows that mushroom-forming fungi still provide another service. Old mushrooms attract fruit flies that have to lay their eggs, and upon arrival, they will also visit the orchid flowers that mimic fermenting and decaying material. Suetsugu conducted experiments in which he removed decaying Mycena mushrooms from the orchids’ proximity or added extra specimens; Mycena species are the main victims of theft by the plant. He found that the more decaying mushrooms are around, the more pollen is removed from and delivered to orchid flowers by flies that are misled, and the more seeds are produced.

So, the fungi not only function as food providers, but also as magnets that attract pollinators – without reward.